Way back in 2009 I posted an entry with this blog about our family's connection with Aaron Burr, a Vice President of the United States that fell into a feud with his former friend, Alexander Hamilton. That affair ultimately led to a duel that left Hamilton dead and Burr disgraced [1].

I have just finished listening to Ron Chernow's biography, Alexander Hamilton, on loan from the North Carolina Digital Library. As I listened to this audiobook I heard a name that caught my attention.

In 1791-2 Alexander Hamilton came under suspicion for possible misuse of his office of Secretary of the Treasury because of rumors circulated by a man named James Reynolds, who had been arrested for his part in a "scheme involving unpaid back wages intended for Revolutionary War veterans." [2] Hamilton was then confronted by a trio of politicians thinking they were on the trail of an embezzler only to encounter a very frank and shocking confession from Hamilton. Secretary Hamilton revealed that he had been engaged in an adulterous relationship with James Reynolds' wife Maria and that James Reynolds had been blackmailing him. Information gained from Hamilton's confession would later be used against him leading to Hamilton's public confession of the affair.

The three men who initially confronted Hamilton were James Monroe, Frederick Muhlenberg and Abraham B. Venable. It was the last name that caught my attention because I recalled that our 4th great-grandmother was Elizabeth Venable. Elizabeth was born on December 8, 1764 and on January 25, 1814 became the wife of Richard Bragg. Elizabeth Venable Bragg's grandfather was named Abraham Bedford Venable, However, this is not the same Abraham B. Venable who confronted Alexander Hamilton.

Abraham Bedford Venable, our 6th great-grandfather, was born on March 22, 1700 in Louisa County, Virginia and married Martha Hannah Davis in 1723. Two of their ten children were brothers Hugh Lewis Venable (born 1727) and Nathaniel Venable (born 1733). Nathaniel served as a Captain in the Revolutionary War and was eulogized at his funeral as "the best mathematician in Prince Edward County."[3] Hugh Lewis Venable would become the father of our Elizabeth while his brother Nathaniel Venable would become the father of Abraham Bedford Venable. It 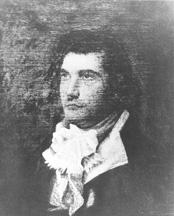 would be that Abraham B. Venable who would become a friend of Thomas Jefferson and would confront Alexander Hamilton. This Abraham B. Venable, first cousin of our 4th great-grandmother Elizabeth Venable Bragg, would serve as United States Senator from Virginia in 1803-1804 (he had previously served as a member of the Virginia House of Delegates and the U.S. House of Representatives).

After his brief time as a Senator (he was filling a vacancy left by John Taylor who had resigned his seat), Abraham B. Venable resigned his Senatorial office to become president of Bank of Virginia.

Just seven years later, on December 26, 1811, the 53-year-old Venable attended a benefit at The Richmond Theatre. It was a packed house that night with 598 in attendance (including 80 children). There were two shows. At the close of the first act of the second show the still lit chandelier was lifted toward the auditorium ceiling when it's cords became entangled and it touched part of the scenery above the stage setting it on fire. When he saw the flames the boy who had been raising the chandelier 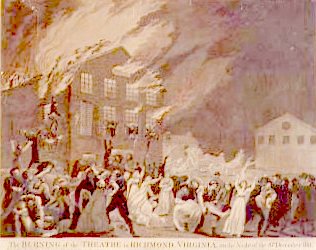 ran from the theater in fear. The fire quickly spread through the extensive scenery pieces. Unfortunately, because the curtains had been lowered, the audience was at first unaware of the fire rapidly spreading above the stage on the other side of the curtain. When the gravity of the situation became apparent, panic ensued. Some were trampled in the rush to the exits while others were jumping from second floor windows to escape.

Described as "the worst urban disaster in American history at the time" [4], the fire claimed the lives of 72 people (54 women and 18 men). Among the victims of the fire were George William Smith, who was at that time the governor of Virginia, and Abraham B. Venable.

Once the area where the theater once stood had been cleared the Monumental Church was built on the site. As its name suggests, the church was to be a monument to those who died in the theater fire. Each of the victim's names are inscribed on a monument standing over the spot where their remains are buried. As a reminder of the era and culture of the age, below the listing of the 66 white victims of the fire are the names of the six African American's who died in the fire.

Notes on Sources:
[1] Did You Know? #11
[2] The Hamilton–Reynolds Affair
[3] Nathaniel Venable, Geni.com
[4] Richmond Theatre Fire
Posted by Bragg Family at 8:55 PM No comments: