Who in our family tree is most closely connected with the $10 bill?

The famous and infamous can be found in every family tree, especially when you consider just how many other families throughout the generations become entwined by marriages. In just going back a few generations we find just such a connection with a man who, depending on who is telling the story, was “one of the most brilliant students graduated from Princeton in

upon his name).2 His is the story of how the famous and infamous can reside in a single person as a moment’s decision taints a lifetime of greatness. 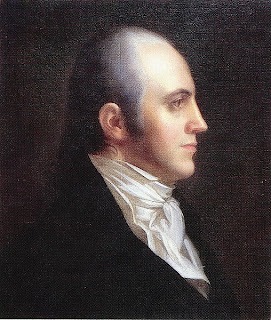 With such a strong drive to succeed, it may come as no surprise that such a person might have a somewhat inflated self-opinion. That seems to be the

case with Aaron Burr, who is to have remarked, "In the past even I was afraid of my own greatness, therefore I could not stand in front of mirrors."

So what is the family connection? Here is the line of ancestry running through this story:

Burr’s father, who served as Princeton’s president, died suddenly of a fever. The vacated Princeton presidency post was then filled

by Aaron Burr, Jr.’s maternal grandfather, the famed Jonathan Edwards. Not long after the death of the elder Burr, Aaron Jr’s mother

contracted smallpox and died. Orphaned at the age of only three (his sister, Sally, was only 1 year old), he was raised by an apparently domineering uncle.

After graduating from college Aaron Burr began practicing law in New York and, at the age of 26, married a widow in her mid

thirties with five children. Two daughters were born of this union, but only one survived birth. Named Theodosia, after her mother, she was widely

esteemed for her gifted intellect.

Burr’s wife died in 1794 after a long bout with stomach cancer, leaving him to raise his eleven

marry Joseph Alston of Charleston, SC. Shortly after their marriage Joseph become that state’s Governor. The couple had one child, Aaron Burr Alston, who died of the fever at the age of ten. About this same time Theodosia Burr Alston died, perhaps when pirates attacked the ship upon which she was traveling. 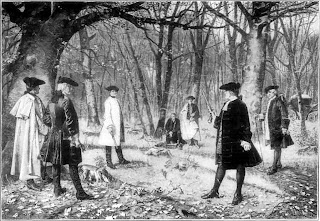 hours of July 11, 1804 along the edge of the Hudson River at Weehawken, New Jersey. It was on that morning that Burr, intent on defending his honor, engaged in a duel with his long-time political foe Alexander Hamilton (pictured on the $10 bill). Burr won the duel, but he lost

any hope of a political future.

Aaron Burr married later in life (at least once). In 1833 seventy-seven year old Burr married Eliza Bowen Juman, a rich widow, but the marriage did not last very long. The couple separated with their divorce being finalized on September 14, 1836, the very day of Burr’s death.

2 Wikipedia, so it MUST be true.
Posted by Bragg Family at 8:47 PM No comments: