In exploring the vast connections of the Bragg family throughout our well over 400 years in America, I noticed recurring confluences of the Bragg and Lincoln families. A branch of the New England Braggs, descending from Edward Bragg (b. 1616):

While probing these intermarriages I came across an even closer connection as our section of the Bragg family tree intermarries with the Hull family (my great-great grandmother, Rebecca L. Hull, wife of William Bragg), and then with the Burr family (Elizabeth Burr, wife of Daniel Burr and my 7th great-grandmother). The Burr family then had a number of intermarriages with the Lincoln family:
Sifting through the various branches of the Lincoln family is a challenging proposal. According to the Hingham County, MA history, there were four adult Lincoln men named "Thomas." These were distinguished from each other by supplying each a middle name by each man's vocation. The result was: 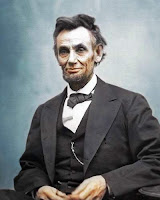 Thanks to the frequent intermarriages between each of these branches increases the likelihood that one can make a strong case for a relationship with President Abraham Lincoln. After placing all the data I could find into my computer program, with an eye toward the frequently contradicting published family trees, I arrived at the following conclusion:
Martha Lincoln is my 5th cousin 8 times removed, both descendants of Symond Burr. Martha is also the 3rd cousin 2 times removed of Pres. Abraham Lincoln (both descendants of Samuel Lincoln and Martha Lyford).