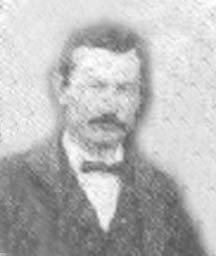 Today there are many actual figures in the long, colorful history of the American West whose legacy continues to flourish. Many of them owe their popularity to Hollywood, but all have been a bit distorted by our entertainment industry.

Many more well-known figures have been virtually forgotten today. But in their day they roamed the west with a reputation that engendered fear and respect. Such was the case with "Little Bill" Standifer, born J. William "Bill" Standifer (in Lampasas County, Texas, 1853), "a dark-haired, brown-eyed man of small stature but large reputation." 1 Bill made his living first as a gunfighter and then as a lawman. But he was "best remembered for having been killed."2

At the early age fourteen Bill found employment as a cowboy at a Texas ranch. While he was out on the range one day he happened to cross paths with a quartet of cattle thieves. The four rustlers beat young Standifer and left him for dead. But Standifer not only survived, he tracked the four down and killed them. Although charged with murder, he was acquitted by the court.

In 1879 he took another job at the Ike Mullins Ranch, also in Texas. Once again turmoil developed between Bill and a fellow cowboy, John McMahon. Again Standifer was beaten, this time with a bullwhip, survived, and  then tracked down his nemesis and killed him.

His next run in was with three soldiers in a Texas saloon, two of whom he shot and wounded. He was then hunted down by the Texas Rangers. Again he was found not guilty in a court of law. With his growing reputation as a gunman, Standifer easily found employment as a Range Detective (whose primary job was hunting down cattle rustlers). One writer wrote of this profession that they "carried his only authority in his holsters." 3 Eventually he was elected County Sheriff of Crosby County, Texas (1888-1892). After this stint Standifer returned to his former work as a Range Detective for the Spur Ranch in Spur, Texas.

Standifer's reputation was enhanced because of incidents such as the one described by Bill Meader, a former Texas Ranger. According to Meader, a drunken cowhand was raising a ruckus in a Snyder, Texas saloon. His celebration was carried to the streets as he began shooting randomly under the hooves of the horses tied in front of the saloon and at nearby houses. This is when Standifer stepped in to confront the troublemaker.  He approached the drunk and demanded that he stop his random shooting, "reminding him that there were respectable women living in the houses nearby." 4 Now the anger of the drunk was focused solely on Standifer as bystanders tensed, anticipating the violent showdown.


"Standifer stood calmly as the drunken cowboy approached."
"Felix," he said, "don't you have a mother and sisters?"
"Yes," Franklin admitted.
"Then," said Standifer, "you don't respect them if you don't respect the women in that house over there."5


Time seemed to crawl as the drunk, Felix Franklin, pondered Standifer's words. "Then he turned without a word and went to his wagon to sleep off his binge."6 This whole scene did not just impact Franklin, but it seemed that it sobered up the other cowhands in town that night. Standifer's speech turned the thoughts of the tough cowboys to their own home, their mothers and sisters.

Over these years trouble began growing between Standifer and a co-worker on the Spur, a better known gunfighter, John "Pink" Higgins. It has never been clearly established why the two despised each other, but both were fired from the Spur and Standifer was eventually elected Sheriff of Hartley County, Texas. The bad blood continued to grow between the two, and finally the inevitable showdown came on October 4, 1903 at Higgins' ranch. "Standifer fired first, hitting Higgins horse, which then jerked, causing Higgins first shot to go wild. In the shooting exchange that followed, Standifer was shot and killed. Higgins horse also died." 7 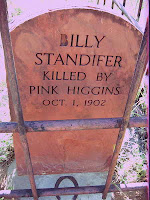 Higgins, who personally buried Standifer, was cleared of all wrong-doing in Standifer's death.8

Bill Standifer's grave has been called the "Loneliest Grave in West Texas." 9

Sheriff, gunman, Range Detective "Little Bill" Standifer and Mom's Greatgrandfather William Standerfer were both the fourth great grandson of John and Margaret Skelton Standiford, making them fifth cousins, as the chart below demonstrates.

This year will witness the exchange of marriage vows between two members of our Bragg family.

Mark and Becky have been together for over seven years, and Becky has won a place in our hearts through the hardships of last fall. I know that Mom will be happy to know that Becky and her son Kerry are officially part of our Bragg family. And Becky couldn't have worded it better when she recently wrote, "The love I have witnessed between Mary and Don has truly given me hope that Mark and I will have that too." 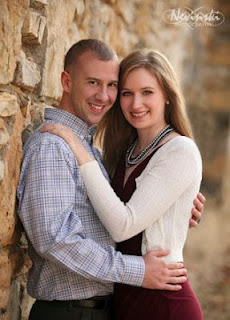 Later in the year, on July 21st, Kari, daughter of David and Ann, will be married to Jonathan Adams at the Smart Road church of Christ in Lees Summit, MO. Kari will have completed her Masters Degree in Music at the University of Central Missouri in May, and Jonathan, the son of John and Pamela Adams of Cedar Rapids, IA, will continue in his studies toward a degree of Professional Pilot at UCM. We are proud to welcome Jonathan to our family.

Congratulations to both of these young couples, and we wish for them great happiness and a long life together as husband and wife.
Posted by David Bragg at 10:26 AM No comments: