Although there are some dissenters, many researchers believe that our branch of the Bragg family can be traced back to America’s earliest settlers in James Town, VA (cf. “Did You Know? #5). In tracing out our family tree through the various maternal branches (associated through marriage to our Bragg ancestors) I discovered an even older connection with earlier American inhabitants.

Tracing backwards from our current generation, as has been previously listed in prior entries, we must traverse the familiar lineage of our last 6 generations:

In 1785 our Great- Great- Great- Great-Grandfather, Richard Bragg, married 21 year old Elizabeth Venable, the daughter of Hugh Lewis and Mary Martin Venable. The Venable family possessed “immense tracts of land in Hanover, Louisa, Goochland and Albemarle” counties, wealth, and a number of slaves. Elizabeth’s grandfather, Abraham Bedford Venable, served as Justice of the Peace in Louisa, County, VA, “Captain of Colonial Militias and County Lieutenant, and a member of the House of Burgesses" from 1742-1762. Elizabeth’s great-grandfather, Abram Venable(s) (the family name originally ended in a final “s,” but Abram dropped the “s” when immigrating to America in 1685), “was a surgeon in the first regiment of troops sent out from England under the command of Sir John Harvie. He was so pleased with the prospects of the Colony of Virginia that he resigned his commission on returning to England and received from [King Charles] a grant of land in Manikin Town.”

Abraham Bedford Venable, a second generation American, married Martha Hannah Davis in 1723. Hannah was the daughter of Nathaniel and Abadiah Lewis Davis. Nathaniel Davis, like Abraham Bedford Venable, was a second generation American (both of their father’s came from Devonshire, England). Hannah’s grandfather, also bearing the name “Nathaniel Davis,” worked as an Indian trader in Hanover County, VA. This dangerous profession was made considerably easier by the fact that the elder Nathaniel Davis’ wife was herself a half-breed, the daughter of Rice Hughes and Nikitti (which means "she sweeps the dew from the flowers").

Nikitti’s father was the greatly feared Opechancanough, Chief of the Pamunkey Indians in Virginia, who “planned the massacres of 1622 in which one fourth of all the settlers of Jamestown were destroyed and 1644.” Eventually captured by Sir. William Berekley, Opechancanough was killed by one of Berekley’s soldiers in 1846 while he was held prisoner in Jamestown.

Opechancanough’s predecessor, his famous brother Powhatan (his real name was Wahunsonacock), was a great warrior in his own rights, serving as the leader of the estimated 15,000 Algonquian Indian population settled near the James River. John Smith described Powhatan as 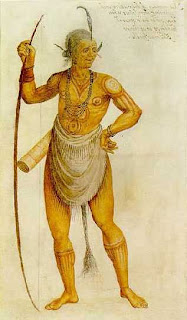 "a tall well proportioned man, with a sower look, his head somewhat gray, his beard so thinne, that it seemeth none at all, his age (as of 1608) neare sixtie, of a very able and hardy body to endure any labour."

Powhatan had a large family, consisting of over 100 wives and many children, most notable

among them was the young Indian girl that endeared herself to John Smith and the English settlers, Amonute (or Matoaka), better known as Pocahontas (or “Lady Rebecca” to the English). 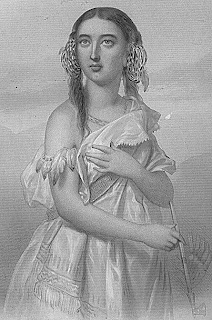 From Nikitti, Martha Hannah Davis’ great-grandmother, the generations can be traced as follows:*

* Researchers vary as to the identity of and chronology of parents. Some list Dashing Stream and Scent Flower as Opechancanough’s father and mother while others list them as his male ancestors. Another confusing aspect comes from the apparent fact that Opechancanough’s wife and mother of Nikitti, Cleopatra, happened to be Opechancanough’s half-sister.