Many years ago Springfield was made the state capital city of Illinois. It was made famous by a lanky country lawyer named Lincoln. But do you know who made Springfield?

The very first white settler of what would become Sangamon County, Illinois was a man by the name of Robert Pulliam. In the fall of 1817 he built a cabin and used the land around it as grazing ground for his cattle. Before long he set out for St. Louis, MO, and later on Cape Girardeau, MO (for 28 my place of residence). While Pulliam was away another settler arrived, Zachariah Peter, becoming the second to take up residence in the area. He found the now empty cabin and moved his own family into it. Mr. Peter was born in Amherst county, VA and two years later his family resettled in Washington County, Kentucky. Zachariah grew up here, married Nancy Spauldin here, and began raising his family (five children) here. The Peter family moved to what would become Sangamon County in 1818, the same year that Illinois would become a state.

In the spring of 1819 Robert Pulliam returned with his own family only to find his cabin occupied by the Peter family. Zachariah moved his family out and built his own cabin, the second in this part of Illinois, about three miles north of the Pulliam place. During this same year the Peters welcomed the birth of their sixth child, James M. Peter. There were apparently no hard feelings regarding living spaces between the Peter family and the Pulliams since Zachariah and Nancy Peter's son, Samuel, married Robert Pulliam's daughter, Margaret.

On April 10, 1821 Zachariah Peter and two other men, John Kelley [1] and William Drennan, were sworn in as County Commissioners and entered into the following contract:
"Article of agreement entered into the 10th day of April, 1821, between John Kelley of the county of Sangamon, and the undersigned County Commissioners of said county. The said Kelley agrees with said Commissioners to build for the use of said county, a court house of the following description, to-wit: 'The logs to be twenty feet long, the house one story high, plank floor, a good cabin roof, a door and window cut out, the work to be completed by the first day of may next, for which the said Commissioners promise, on the part of the county, to pay said Kelley forty-two dollars and fifty cents. Witness our hands the day and date above."
The men drove a stake in the ground at the site of the county's very first courthouse. The stake was marked "Z., P. & D."[2] Today you should be able to find a marker near the intersection of E. Jefferson and N 2nd Streets in Springfield. [3] 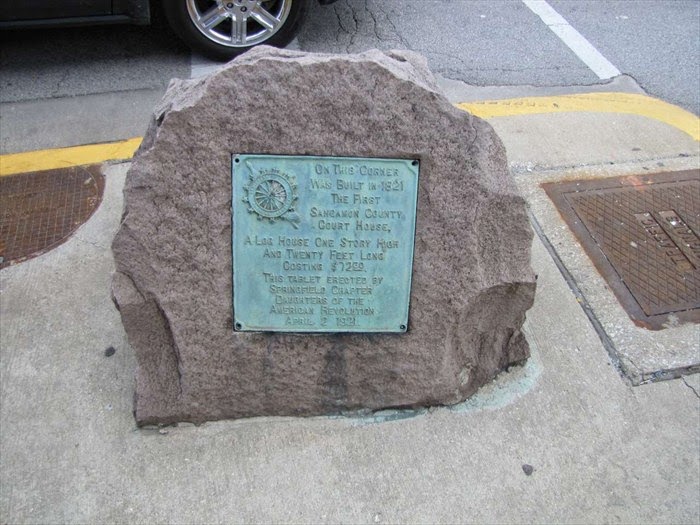 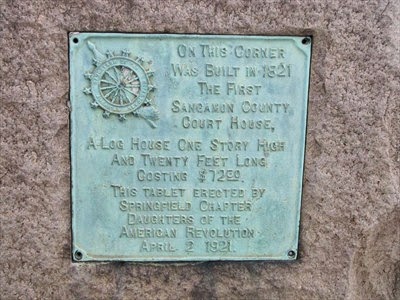 In addition to his participation in the building of the first courthouse, Zachariah Peter also continued to serve in local government:
"William Drennan and Zachariah Peter were recommended to the governor as persons fit for the office of justice of the peace. Their duties included enforcing law and order and settling minor squabbles, but the justices were also responsible for performing marriages. Peter conducted seven of the 16 weddings known to have taken place in Sangamo Township between 1819 and 1821. Ministers James Sims, Rivers Cormack and Stephen England performed the others." [4]
You will note in the above excerpt that at this early date final "n" was yet to be added to the area ("Sangamo Township").
Even before Lincoln arrived in central Illinois Zachariah Peter literally made his mark. But it was not until I began sorting through some of Mom's papers that I learned the story of Sangamon County's birth and the story of Zachariah Peter, Mom's 3rd great-grandfather. Here is the connection:

[1] After the death of Nancy, Zachariah Peter married Margaret Kelly, the widow of this John Kelly. "They had one child-- PETER CARTWRIGHT, born in Sangamon county. He was a soldier from Sangamon county in the war with Mexico, in 1846 and '7. He went to Washington Territory, where he was married; went from there to California, and was killed by Indians, leaving a widow and one child in California." {From EARLY SETTLERS OF SANGAMON COUNTY - 1876, by John Carroll Power

Posted by David Bragg at 8:46 PM No comments:


Ida May Bragg, 88, of Sullivan passed away 3:30 a.m. Sunday, February 16, 2014, at her daughter’s home in Pekin. Funeral services will be held 11:00 a.m. Saturday, February 22, 2014 at McMullin-Young Funeral Home, Sullivan. Visitation will be held one hour before the services. Burial will be in Greenhill Cemetery, Sullivan.
Memorials may be made to the First United Methodist Church, Sullivan, or to the St. Jude Children’s Research Hospital, Peoria.
Ida May West Bragg was born May 27, 1925, the third of four children born to Ivan and Ruby Irene (Enterline) West of rural Bruce. She married R. Earl Bragg on Easter Sunday, April 6, 1947. She was preceded in death by her husband on August 20, 2001.
She is survived by her sisters, Arletta Marie Elzy of Mt. Vernon and Ruby Irene Elzy of Austin, Texas, formerly of Sullivan; and her brother, James William West, and his wife Katie Ellen of Cowden. She is also survived by three daughters, Sue Ann (Charles) Renner of Pekin, with whom she made her home in recent years, Nina Louise (Mike) McGuire of North Platte, Nebraska, and Teresa Carol (Steve) Esterholdt, of Ontario, Oregon. She delighted in her eight grandchildren and seven great grandchildren, as well as three generations of nieces and nephews.
She lived most of her life on the centennial farm on which she was born. In addition to raising her girls and caring for children in her home, she served as bookkeeper for the Toggery in Pekin, IL, and as a secretary for the Welfare office and University of Illinois Farm Extension office in Sullivan. She was a capable and respected employee and made life-long friends in her workplaces. A member of the First United Methodist Church of Sullivan, she was a faithful volunteer for funeral dinners and special projects. She enjoyed membership in Civic Club, Home Extension, and Moultrie County RSVP.
She loved entertaining and visiting with family and friends, as well as traveling with her daughters and her extended family. Her later years were brightened by the fond attentions of her grandchildren and great grandchildren. She leaves a legacy of devotion to family and a joyful interest in people and places.
Posted by David Bragg at 9:53 AM No comments: 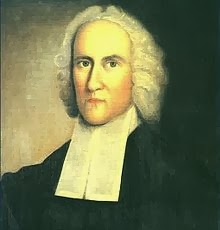 I am reading a book entitled 10 People Every Christian Should Know by Warren W. Wiersbe. One of these individuals is Jonathan Edwards (1703 – 1758), perhaps best known for his famous sermon "Sinners in the Hands of an Angry God." What I didn't know was that it was that very sermon that cost Edwards his job.

Edwards is known as one of America's greatest intellectuals. He was distinguished as a preacher, theologian, missionary, and educator. His son-in-law, Aaron Burr, Sr., was serving as president of Princeton University (then known as the College of New Jersey) at the time of his death. Edwards was persuaded to fill Burr 's position. Edwards took office on February 16, 1758, shortly before an outbreak of small pox. He volunteered for the small pox inoculation hoping his example would encourage others to follow suit. Instead, he fell ill and died from the inoculation on March 22, 1758.

Jonathan Edwards' descendants have included many influential roles in American history, according to his biographer George Marsden who "notes that "the Edwards family produced scores of clergymen, thirteen presidents of higher learning, sixty-five professors, and many other persons of notable achievements."" [*] His grandson, Aaron Burr Jr. served as United States Vice President under Thomas Jefferson and the victor in his infamous duel with Alexander Hamilton.