As you read these words you should be able sense our extended family tree becoming more and more ponderous. Stepping out on this particularbranch will bring you face to face with some of the great names of our time, in Hollywood (R. Burton), business (Hilton), and politics (Warner), and the inspiration for the number one hit of the Statler Brothers. And it can all be found by looking into the incredibly pulic life of one of motion pictures most admired actresses, and our grandfather's 9th cousin.

Here is the connection...

Born in London, England (her mother, a retired actress, and father, art dealer, were in England on business), "Liz" Taylor was a hit from her very first film, There's One Born Every Minute (1942), and appeared in some of the greatest movies of the next two decades, such as:
National Velvet (1944)
Life with Father(1947)
Father of the Bride (1950)

Cleopatra (1963; costarred with future husband Richard Burton, the first of 11 films together)

She is also greatly renowned for her many marriages (8), seven of which ended in divorce and two of those to the same man (R. Burton). "Fourth-husband Eddie Fisher said that a $50,000 diamond could keep Taylor happy for approximately four days."[1] An episode in the classic sit-com "Here's Lucy" revolves around Lucy getting one of Taylor's famous diamond rings stuck on her finger, the highest rated episode of that series. "She has been named "#7 in the American Film Institute's list of the 50 'Greatest American Screen Legends'"; voted "the 11th Greatest Movie Star of all time" (Entertainment Weekly); highest rated episode of A & E's popular "Biography" series (1987); runner up for the most times featured on cover of People magazine (14 times up to 1996, Princess Diana was first); in 1976 she was second in a magazine poll for "Most Memorable Eyebrows" (Lassie was first);and she was the first "actress to earn $1,000,000 for a movie role (in Cleopatra (1963)."[1] She was nominated five times for the Oscars, and won twice (Who's Afraid of Virginia Woolf? in 1966; BUtterfield 8 in 1960) along with numerous nominations and wins for very presigious awards (i.e. Life Achievement Award; Cecil B. DeMille Award; Golden Globe [3 nominations, 1 win for Suddenly, Last Summer in 1959).

Posted by David Bragg at 9:20 PM No comments:

This will be an entry dealing with opposites, graves, and connections with our Bragg family.

If you were to list five infamous outlaws in the old West, I just bet that our first subject will come to mind. Jesse and Frank James emerged from the American Civil War (where they rode with the infamous Kansas terror William Quantrill and Bloody Bill Anderson) and began a new career in crime. Sons of a Baptist preacher, the Rev. Robert James, reputedly "pulled off the first daylight bank robbery in peace time," stealing $60,000 from the bank in Liberty, MO, not far from their home and the community in which their father had helped to found the William Jewell College.[1]
Over the next 15 years their gang held up banks and trains, Jesse married his first cousin, Zerelda, and traveled as far as Minnesota to rob the Northfield bank. The James-Younger gang was stunned when they suddenly found themselves caught in the fire of feisty citizen's defending their bank and town. Frank and Jesse escaped alone.

Although they attempted to begin lives under assumed names, eventually they returned to a life of crime, recruiting the help of Bob and Charlie Ford. But they could not resist the $10,000 reward on their leader's head. On April 3, 1882 Bob shot Jesse in the back of his head as he was adjusting a picture on his living room wall. Or did he? Theories raged for decades as to who was buried in Jesse James' grave.[2]

The connection of the James brothers with our family comes through our father's 3rd great-grandmother, Elizabeth Venable (wife of Richard Bragg, 1762-1840). The next two charts illustrate the connection.


What kind of person do you think of as being the opposite of the outlaw Jesse James? How about a legendary explorer, trailblazer, a man who fought for family and country? That would be Daniel Boone (the real one, not Fess Parker, although he is pretty great too). 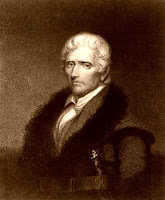 6th great-grandfather Abraham Bedford Venable, that is Judith Morton), the connection with the Boones comes through Jesse James' daughter-in-law.

Boone, born in 1734, was a talented hunter and pioneer who loved solitude. Feeling "crowded" he was always moving westward. When he brought his family through the Cumberland Gap, Daniel's wife, Rebecca Bryan, became the first white woman settler of Kentucky.

Although he fought the Native American's for the land he, and others, were attempting to settle (on one occasion they kidnapped his daughter, on another they murdered his son), he eventually gained their respect. In later life he settled in Missouri, living with his son, Nathan (near Defiance, Missouri). [3] It was there that he died in 1820, at the age of 83.

As you can see in the chart below, Jesse James' daughter-in-law, Stella McGowan, was the 3rd great-granddaughter of Daniel Boone.

As we began I stated that this entry is all about "opposites" and "graves." Boone and James certainly covers the "opposites," so what about the "graves?"

At first Daniel Boone was buried near his wife, Rebecca (who passed away in 1813) in Marthasville, MO. However, today Frankfort, KY purports to be the final resting place of the great frontiersman. Folks in Missouri insist that when the Kentuckians came to dig up Boone's body in the 1840's, they dug up the wrong body. At the time of Boone's death the grave next to his wife's was already occupied, so Daniel was buried at the foot of Rebecca's grave. As a result, both states claim to be the site of Daniel Boone's grave.[4]

The question surrounding the grave of Jesse James is, "Who is buried really buried in Jesse James' grave?" For Daniel Boone the question is, "Where is the real Boone's grave?"

With today's scientific advances some of the mysteries of these graves, Boone's and James', have been clarified. Is it the body of the infamous outlaw that is buried in Mount Olivet Cemetery, Kearney, MO? Scientists say, "Yes?" Where is the "real" Daniel Boone buried, near Defiance, Missouri or Frankfort, Kentucky? Researchers, after studying casts made of the skull buried in the Kentucky grave have concluded that the body buried there is that of "a large black man."[4] Neither decisions have quelled the debates surrounding the graves of these two men, one famous and the other infamous.