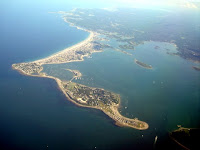 I love flying into Boston. Not only does it mean that we will be able to see our son, Nathan, and his wife, Carissa, but if the weather is clear we will be treated to an amazing view as we fly out over the Atlantic, circle around over Boston harbor.

Here is a picture I took the last time we made the trip. Since we had to circle Boston twice before landing I especially noticed this peninsula jutting out into the harbor.. In my recent studies of our family history I learned that the particular land mass in that picture is the town of Hull, MA. Immediately mental "flags" went up. I had to learn more.

The land upon which Hull, MA now stands was originally known as Nantasket. The settlement that would become Hull, MA can be traced "across the pond" to the religious turmoil in England. In search for the freedom of religion for which they yearned a group of "pilgrims" made the trip to the New World. One of the leaders of this exodus was the Rev. Joseph Hull (1596-1665).

The group of 105 immigrants was known as "Hulls Colony" arrived in Boston, MA on May 6, 1635 he arrived at Boston, MA on, many historians believe, as ship named "Mary Gould/Gold" [1] They originally settled in Weymouth, MA. On :"July 8, 1635, the General Court of Boston passed an order giving permission to the Rev. Joseph Hull, with twenty-one families numbering about one hundred persons, to settle at Wessagusset" (today known as Weymouth, MA). [2]

Hull moved from Weymouth about a year later and settled in Nantasket, where the towns of Hingham and Hull now stand, and a couple of years after that (1636) he moved to, and established the town of Barnstable on Cape Cod land granted to him. [3] "in 1639 to the Old Colony of Plymouth, and there founded the present town of Barnstable, at a place called by the Indians, Mattakeese. The rock still stands in the middle of the highway, from which he preached, surrounded by his armed parishioners." [4]

In 1641 Hull moved to nearby Yarmouth after becoming in a dispute with the religious authorities under which he served. [5] According to the Barnstable church records, Hull soon "acknowledged his sin and was again received" into the fellowship of the Barnstable church. However, by the end of 1643 he moved to York, ME.

While many websites assert that the town of Hull, MA was named for a town in England, which in turn is named for a nearby river, Hull, it would come as no surprise to find, in sources dedicated to Rev. Joseph Hull that his name would be associated with the town. However, the History of Weymouth Massachusetts notes that in 1644 "Nantasket was made a town and named "Hull," in the honor of Rev. Joseph Hull." [8]

The Hull family has been traced backwards from Joseph Hull to his great-grandfather:

This would make Rev. Joseph Hull our 10th great-grand uncle. George Hull was a "surveyor, Indian trader, magistrate, statesman," who settled the town of Dorchester, Massachusetts, about 1630, then removed in 1636 to Windsor, Connecticut.

The Hull family has a rich history in New England. Allow me to introduce you to a few Hull family members that caught my eye.

One of Joseph's son, Capt. Tristam Hull (1624), was a mariner and leading citizen of Barnstable, MA while another, Joseph (1622) "was apparently a son in disgrace at York, Maine, in February 1644/45. He is no later mentioned." [9] While Capt. Tristam Hull was highly respected in church and community, the same could not be said for his wife.

"In March 1656 John Gorum was fined forty shillings "for unseemly carriage toward Blanche Hull at an unseasonable time, being in the night." Blanche Hull was fined fifty shillings "for not crying out when she was assaulted by John Gorum in unseemly carriage towards her." Both Gorum and Blanche were married at this time, Gorum to Desire Howland, eldest daughter of John Howland and his wife, Elizabeth Tilley Howland, and Blanche to Tristram Hull. The court evidently considered Blanche to have been a willing participant rather than a victim." [10]

Shortly after Tristam Hull's death, his widow Blanche married Captain William Hedges who was many years her senior. The marriage was apparently not a good one. When Capt. Hedges drew up his will he "left his second wife, Blanche Hull, widow of Tristram Hull, only a token twelve pence, "full eleven pence more than she deserved". And "also what I have received of hers shall be returned to her again," because she had deserted him."

Another son, Hopewell Hull (about 1636) was one of the founders of Piscataway, New Jersey.

One of Joseph's daughters, Naomi (1640), was left in the care of another family for the decade Joseph returned to England. In 1682 she "was the center of more trouble by speeches against her brother and sister"

Another daughter, Elizabeth Hull (1628), married John Heard in 1643. Heard was a master carpenter. Mr. Heard seemed to have freely shared his thoughts about others, a trait that kept community officials busy (for example, he was find by the court for "calling Edward Godfrey, Governor of York County, Maine, "Old Knave"). "The story of Elizabeth's experience on an exposed outpost where for a long time she was surrounded by hostile Indians has been told in detail by Cotton Mather in his Magnalia Christi Americana as well as in Belknap's History of New Hampshire and in Pikes Journal." [11]

John and Elizabeth Hull Heard's son, Samuel, married Experience Otis who was scalped by Indians on July 26, 1696. She not only survived that ordeal, she outlived her husband and went on to marry Rowland Jenkins.

[1] Vol. I, History of Weymouth Massachusetts in four volumes [1923] published by the WEYMOUTH HISTORICAL SOCIETY, Wright and Potter Printing Company, Boston. To see the list of these immigrants at
http://www.immigrantships.net/v3/1600v3/hullcompany16330320.html>

[2] Chapter XV THE COMING OF THE HULL COMPANY.

[3] The General Court declared "that a warrant shall be directed to the Constable of Yarmouth to apprehend Mr. Joseph Hull (if he do either exercise his ministry amongst them or administer the Seals), to bring him before the next magistrate, to find sufficient sureties for his appearance at the next General Court, to answer his doings (being an excommunicant).""

[6] In England "he became Rector of St. Burien in
Cornwall, near Lands End
and remained there for ten years, at which time he was ejected from the
parish."

[7] The Isles of Shoals are a group if islands 10 miles S.E. of Portsmouth, NH. Maine-New Hampshire boundary now passes through them.

[11] http://homepages.rootsweb.ancestry.com/~sam/hull/elizabeth.html>
Cotton Mather wrote of Elizabeth Hull Heard: "During an unprovoked and cruel massacre of Indians by whites in 1676, Elizabeth saved the life of a young Indian boy by concealing him until his would-be slayers had left her house and then aided him to escape. Twelve years later she would fall into the hands of the Indians and would escape unharmed by the aid of this same Indian."

Posted by Bragg Family at 5:01 PM No comments: