In a previous posting we investigated the connection from the Ethington side of our family with the Braggs who settled early in the Boston area before relocating to Maine. While connecting those "dots" was admittedly convoluted, to the say least, further study has opened up ,an even clearer connection with this somewhat isolated Bragg "cousins." While this connection is

On February 4, 1918 Gladys Gilbreath and Orval Bishop Bragg were married. Grandma Bragg was one of five daughter's born to Cicero Gilbreath and Elvira Munson (pictured on the left). "Vie," as she was called, descended from Capt. Thomas Munson, "the ancestor of all the Munsons in the United States" <http://wc.rootsweb.ancestry.com/cgi-bin/igm.cgi?op=GET&db=dsb4&id=I0101>. Capt. Thomas (1612-1685) was Grandma Bragg's 7th great-grandfather. Upon his 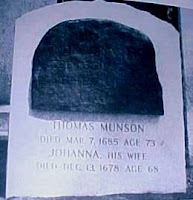 arrival in the New World, he made his home at Hartford, Connecticut prior to helping to found the village of New Haven, Connecticut where many "members of the Munson family were benefactors for establishing Yale University" (where Capt. Munson is buried in the Grove Street Cemetery, also the resting place of Eli Whitney, Noah Webster and Charles Goodyear; see <http://www.rootsweb.ancestry.com/~pasulliv/
settlers/settlers16/settlers16.html>). In fact, in August of 1987 Yale celebrated "The 350th Anniversary of Thomas Munson coming to America." Thomas' son, Samuel Munson (1642-1693), along with 38 others founded the town of Wallingford, Connecticut. To learn more, visit the Thomas Munson Foundation at http://www.thomasmunson.org/about_tm.asp

So how do the Munsons and the New England Bragg family intersect? The first chart below illustrates the lineage from Capt. Thomas Munson to Grandma Bragg (column 1). The lines divide with the brothers [marked in red] Solomon (1688) and Waitstill (1697), sons of Samuel Munson (1669). This would make Isaac Munson (1802, Grandma Bragg's great-grandfather) and Orpha Munson (1793) third cousins (you have to go up three generations to find their common ancestor) [marked in green].


Based on this, we can identify Grandma Bragg and Orpha Munson as 3rd cousins 3 times removed. The next chart demonstrates the further connection between Orpha Munson's parents, Waitstill Munson (1760) and Elizabeth Frisbie (1757),who were 2nd cousins 1 time removed. Their common ancestor is Samuel Munson a(1643). Waitstill's great-grandfather Samuel and Elizabeth's grandfather Caleb were brothers [marked in red].


The final chart, below, completes the connection between the Munsons and the New England Bragg families. Orpha Munson married James Bragg, the great-great-grandson of Nicholas Bragg (1615), the brother of Edward Bragg (featured in Did You Know #12 <http://thebraggfamily.blogspot.com/2009/08/did-you-know-12.html>), sons of Nicholas Burton Bragge.

Posted by Bragg Family at 7:57 PM No comments: