This has been, to me, the most enjoyable work in preparing a post to our family blog. It is filled with some of my fondest memories growing up: gathering around the old black and white, and especially Bonnie's enjoyment at the certainty that SHE was going to be the very first victim in EVERY single episode. As the familiar theme wafted towards her bed her anticipation would build until finally, as pistols blazed, she would exclaim, "Ouch, they got me!" Even today, if you were to call my cell phone, that familiar theme serves as my ringtone. 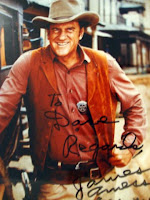 James King Aurness was born in May 1923 in Minneapolis, MN. As a young man he already towered over his classmates as he was on his way to his familiar height of 6' 6". During the second World War he served with 3rd Infantry Division and served a leading role in the invasion of Anzio, where he sustained a severe leg room that would plague him as he ages and was noticeable in his work as he mounted and dismounted his horse. Urged by his younger brother, James made his way to California to begin his acting career, appearing first in "The Farmer's Daughter" (1947). Following the advice of that movie's director, H.C. Potter, James "Aurness" became James "Arness."

Perhaps his biggest break came from his work with John Wayne. After making a few movies together, he was on the Duke's mind when he was approached with the offer of starring in a new television program based on the popular radio show, Gunsmoke. Wayne was not interested, but he knew just who to recommend, and he even introduced the first episode (you can see his introduction on YouTube)

From 1955 until 1975 James Arness kept the peace in Dodge City, tried to keep the peace between Doc and Chester (and later Festus), and kept from kissing Miss Kitty. Following the end of the television series he starred in How the West Was Won television series, the short-lived McClain's Law (1981), and a re-make of John Wayne's Red River (1988), and a number of made for TV Gunsmoke movies. 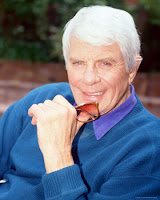 He was married to Virginia Chapman from 1948 until their divorce in 1963. They had three children. His only daughter, Jenny, appeared in two episodes of Gunsmoke, but sadly she died of a drug overdose in 1975, just as Gunsmoke was ending its run. James Arness and Janet Surtrees were married in 1978.

If we are related to James Arness, that obviously we are related to his younger brother, Peter Graves (born in 1926), who likewise had a long-running television career at Agent Jim Phelps in "Mission: Impossible" (1966). Peter made many movies, one of the most memorable being the pilot on Airplane (1980). Sadly, Peter passed away on March 14th of his year.

To find the family connection we must go back a number of generations to John of Gaunt, Prince of England (1340-1398), son of King Edward III (1312-1377). John had a number of wives, but in 1395 he married Catherine de Roet, Duchess Of Lancaster. The chart below traces out the two family lines: