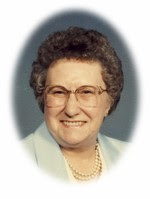 Having passed through security at the Las Vegas airport, and while awaiting to board our plane for our return to St. Louis after a week-long vacation to Utah and northwestern Arizona’s national parks seemed like a good time to call home and wish my father a happy 88th birthday. It was then that I learned that my call had been proceeded by another of a much different nature. That prior call bore the sad news that earlier in the morning my father’s oldest sister had passed away.

This has been a hard year for my family. In December my father’s younger brother, Duane, laid to rest his second wife, then just a few months later, on June 2nd, he passed away. Three weeks later another uncle, Forest Ledbetter passed from this life. His death was followed by that of his wife, my father’s older sister, Ellen Jane Ledbetter on August 8th at the age of 90.

Aunt Jane was a graduate of Windsor, IL High School and the Paris School of Nursing. As a RN she served as a WWII Army Nurse, attaining the rank of Lieutenant. As her obituary states, after the war she became “the Director of Nursing for the Mattoon Memorial Hospital and was instrumental in merging the Mattoon and Charleston Hospitals into Sarah Bush Lincoln Health Center.” In an e-mail from one of my cousins I learned that Aunt Jane “was part of a team that built hospitals in whatever buildings were available in New Guinea.” I was not able to attend the funeral, but my cousin did, and she shared the following with me: “Her youngest great grandson helped the funeral director steer the casket into the hearse and then, at the cemetery, saluted as the honor guard saluted his grandma. I don't think too many Sullivan women are honored with a 21-gun salute as Aunt Jane was.”

Earlier in the year my mother lost one of her sisters, Lois Whitely. This has been a hard year, and while I hope that my parents will be spared in the remaining months of this year from having to stand beside the graves of other loved ones, I am also thankful for the long loves each of these have been allowed to live.
Posted by Bragg Family at 9:37 PM 1 comment: